Eight different cropping systems are in a randomized complete block design (5 replicate blocks of 30 × 40-m plots) that include, in order of plant diversity, continuous corn, a corn-soybean-canola rotation, switchgrass (Panicum virgatum variety Cave-in-rock), miscanthus (Miscanthus x giganteus), hybrid poplar trees (“NM-6”, Populus nigra x Populus maximowiczii), a 5-species native grass mix, an early successional community, and restored prairie. In 2012 the corn-soybean-canola system was replaced by a continuous corn + cover crop system and a corn-soybean + cover crop system with two entry points. Split plots include stover removal and stover non-removal for the annual crops and with and without nitrogen fertilization for the perennial crops. Starting in 2013, 1/3 of the stover microplot control was herbicided and the first yield was taken from these plots in 2014.

Click here for species and seeding rates of the native grasses (G7) and native prairie (G10). 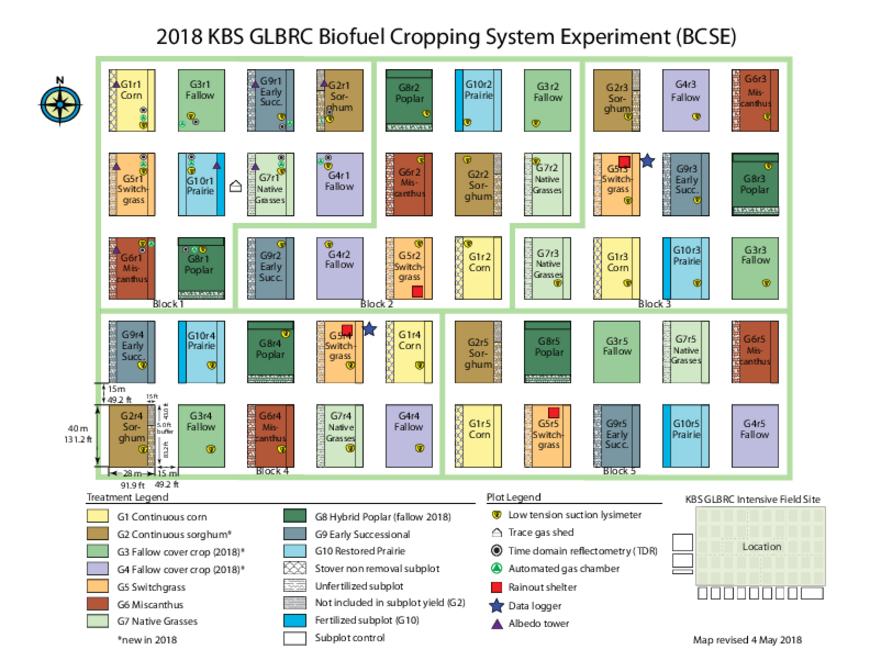 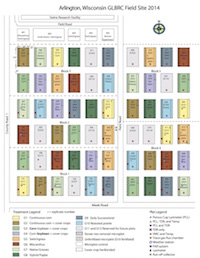 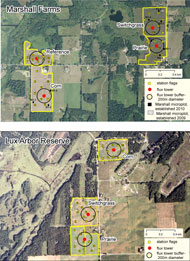 The GLBRC Scale-up fields at Marshall Farms and Lux Arbor Reserve, were established in 2009 to provide a larger context for addressing biodiversity and biogeochemistry questions associated with biofuel production. Fields are managed as native prairie (5 grass and 14 forb species), switchgrass and continuous corn. The GLBRC Scale-up fields at Marshall Farms also include a reference field which continues as CRP brome grass. Prior to conversion to biofuel crops, the four Marshall Farm fields were in the USDA Conservation Reserve Program (CRP) from 1987-2008. The three scale-up fields at Lux Arbor were not in the CRP program. Based on aerial photographs, the seven scale-up fields have been farmed with hay and row crops since at least 1938 and it appears that during the 1950’s the Marshall fields had some animal grazing. The map shows the location of CO2 flux towers, which measure the flow of CO2 into and out of the crop canopy and soil, and thereby allows a complete carbon budget to be constructed. This provides information on rates of carbon sequestration and loss from these different systems. Switchgrass was planted at a seeding rate of 10 lbs/acre. Click on the image for a printable map. Click here for species planted on the prairie. Click here for field naming conventions and land use history by field.

The Great Lakes Bioenergy Research Center’s (GLBRC) Extensive Sites are farm-scale fields located on working farms. Fields of corn, switchgrass, and restored prairie are represented at each of 10 locations in both Michigan and Wisconsin, for a total of 30 sites across 11-13 counties in each state. Field sizes ranges from 5-150 ha (13-375 acres) and were at least 5 years old when first sampled in 2008. The sites are used mainly to assess biodiversity responses of specific insect, bird, and microbial populations to biofuel crop type. Annual net primary productivity and plant species composition are also measured for each field.
Click on the image for a printable map. 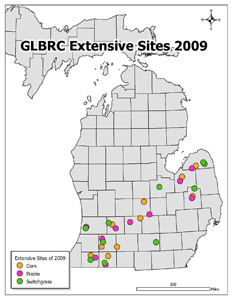 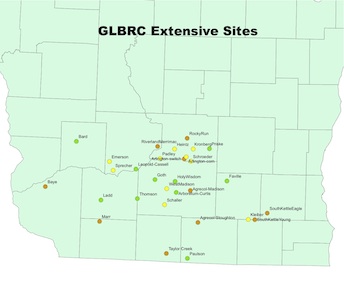 In 2013, GLBRC Marginal Land experimental sites were established in Wisconsin and Michigan to evaluate the potential for using lower productivity fields for low input bioenergy feedstocks. The map below shows the three sites in Wisconsin and in Michigan; both states have a site in the south, central and northern parts of the state. All six cellulosic biomass crops, treatments G5-G10, and a control, no change, “historical vegetation” (G11) are replicated in 4 blocks. The plots are approximately 64 feet x 40 feet except for G8 which is 64 feet x 64 feet. The treatments include G5-switchgrass (Panicum virgatum variety Cave-in-rock), G6- giant miscanthus (Miscanthus x giganteus), G7- a 5-species native grass mix, G8- hybrid poplar trees (“NM-6”, Populus nigra x populous maximowiczii), G9- an early successional community (ground prepared like other treatments but no seeds were planted), and G10- restored prairie. Click here for species and seeding rates of the switchgrass (G5) ,native grasses (G7) and restored prairie treatment (G10). 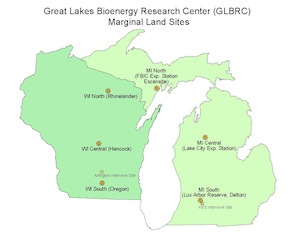 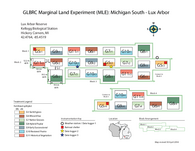 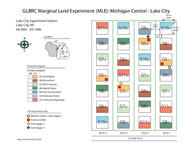 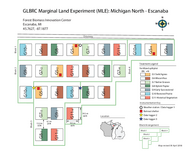 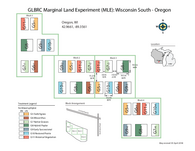 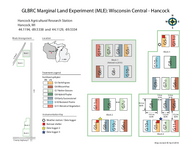 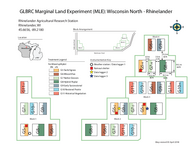 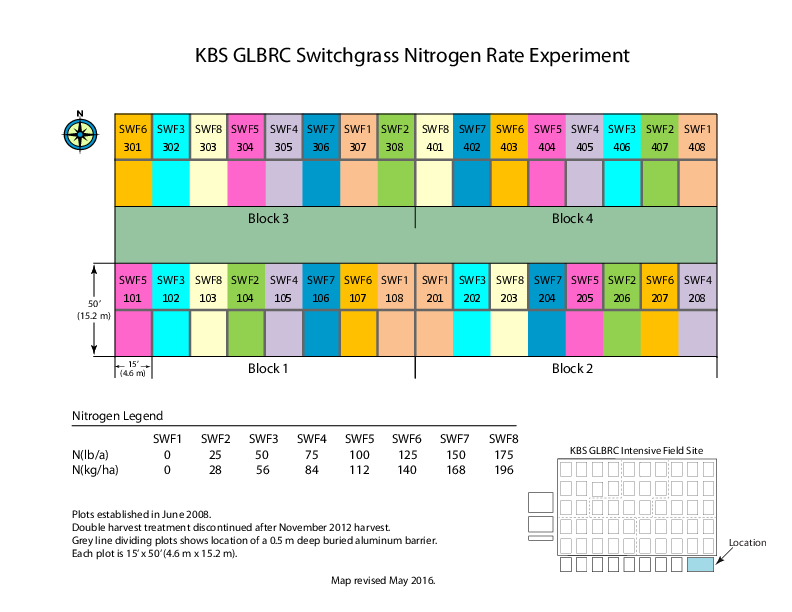 The Switchgrass Nitrogen Rate Experiment is a long-term study located at the KBS GLBRC Intensive Site. The experiment is laid in Randomized Split-Plot design with 8 × 2 factorial arrangements of fertilizer levels and harvest strategies, respectively. Nitrogen applications range from 0 to 196 kg N / ha with two harvest strategies as one and two cuts per year. Plots are 4.5 × 6.0 m (15 × 20’) arranged in each of 4 replicate blocks. The experiment was established in 2008 and the goal is to study the effect of nitrogen levels and harvest strategies on plant productivity, greenhouse gas emissions and nitrogen availability to plants. The first fertilizer application was made after one year of establishment. Click on the image for a printable map. 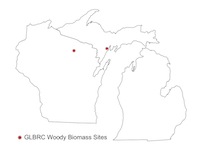 Old hay fields, pastures and abandoned agricultural land have been identified as targets for conversion to short-rotation woody biomass crops (SWRC) to supply feedstock for multiple woody-biomass-based energy projects in northern Michigan and Wisconsin. Widespread conversion of open lands to SRWC is likely to have significant environmental impacts, including: greenhouse gas (GHG) emissions, changes to soil C stocks, and changes to hydrologic fluxes of NO3-. The goal of the Woody Biomass Initiative project is to better understand potential feedstock production, soil GHG emissions and NO3- leaching resulting from maintaining open lands in herbaceous cover vs. converting them to SWRC. Two sites were selected representing marginal hay fields characteristic of the region, one in Michigan’s Upper Peninsula and one in northern Wisconsin. At each site we have located 12, 40 × 40 meter plots randomly assigned to one of three treatments: 1) conversion to willow bioenergy plantation, 2) conversion to hybrid-poplar bioenergy plantation, or 3) maintained in herbaceous vegetation. Within each plot we are measuring biomass production, soil emissions of CO2, N2O and CH4, and leaching losses of NO3-. Click below to download the experimental layout or on the map at the right to download the map as a printable version. 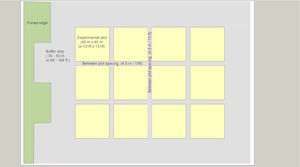 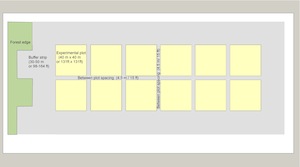 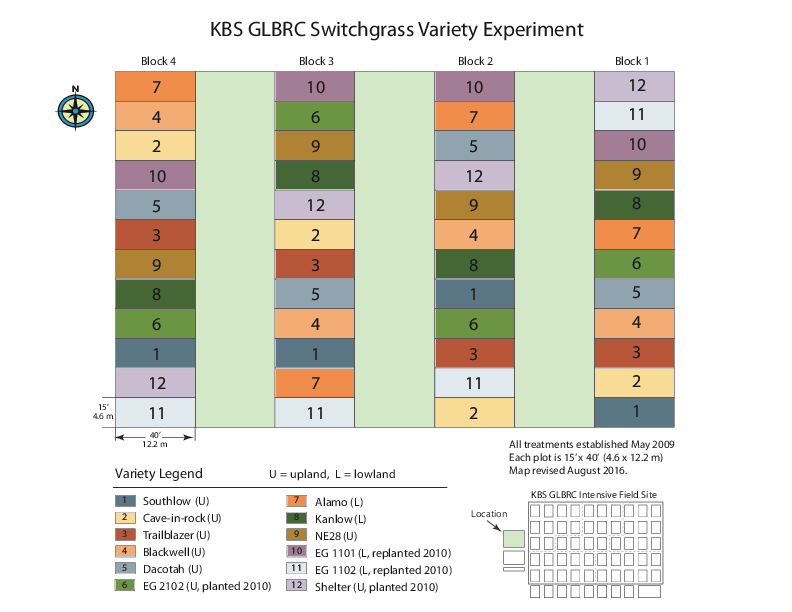 The switchgrass variety experiment is a long term study established in 2009 at the KBS GLBRC Intensive Experimental Site. Five upland and lowland varieties are planted in complete randomized block design. Plots are 4.5 × 12 m (15 × 40’) arranged in each of 4 replicate blocks. Upland varieties are Southlow, Cave-in-Rock, Trailblazer, Blackwell, NE28 and Dacotah and lowland are Alamo, Kanlow and two experimental varieties.The varieties are being tested for such traits as establishment potential, plant productivity and plant quality. Click on the image for a printable map.

A long term study was established in 2009 to determine the plant productivities and plant quality traits of eighteen different potential ethanol and biodiesel feedstocks. The experiment is laid at the KBS GLBRC Intensive Experimental Site in complete randomized block design. Treatments plots are 4.5 × 12 m (15 × 40’) arranged in each of 4 replicate blocks. Click on image for a printable map.